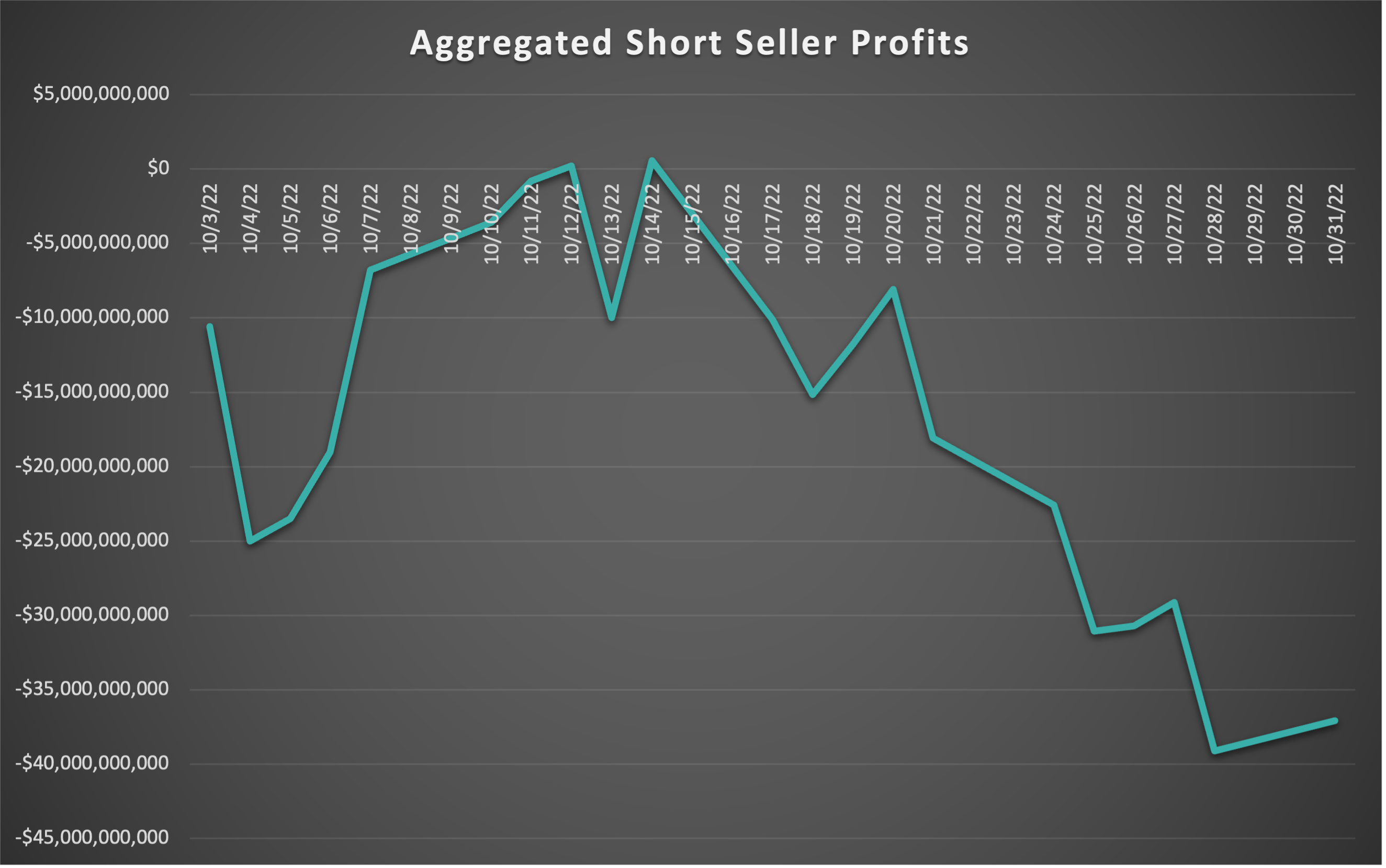 October proved to be a volatile month, with the major indexes breaching the June lows to set fresh year-to-date lows before staging a strong rebound to finish the month higher. Short interest changes across the S&P 500 sectors were mixed. The biggest decline in short interest was within the energy sector, which saw a 13.8% decline in short interest shares to 390.8 million. Consumer discretionary stocks saw the largest increase in bearish sentiment, with short shares rising 2.8% to 875.8 million.

Here are ORTEX’s estimates for how aggregate short interest (SI) shares changed for each S&P 500 sector for the month of October.

As the S&P 500 advanced throughout the back half of October, short sellers started to accumulate heavy losses. The bears ended up losing an aggregate $37.07 billion for the entire month.

Of the major tech stocks that reported earnings last week, only Apple (Nasdaq: AAPL) was able to deliver solid results that reassured investors and sent the stock higher. With 900 million paid subscriptions across its entire Services business, the Cupertino-based tech giant earned investor confidence that its business will be resilient in the face of macroeconomic headwinds. Apple bears incurred total losses of $1.62 billion for the month.

On the other end of the spectrum, Tesla (Nasdaq: TSLA) delivered the most profits to short sellers during the month of October. The electric vehicle (EV) leader missed revenue expectations in the third quarter, even as sales set a new quarterly record. CEO Elon Musk closed his acquisition of Twitter last month, which is also fueling fears around how foreign governments could leverage speech regulations around the newest entrant into the Elon Musk Cinematic Universe in ways that could potentially impact Tesla. Tesla shares are trading near 52-week lows, with short sellers enjoying $2.5 billion in gains for October.

In terms of the top short squeeze candidates as of right now, here are the 10 stocks that have the highest ORTEX Short Scores on our platform. Our ORTEX Short Score uses a multi-factor model that incorporates multiple short-related metrics, with a higher score indicating that the stock is heavily-shorted and has other characteristics that increase the possibility of a short squeeze occurring.

By just about any measure, technology stocks have suffered a historic sell-off this year amid surging interest rates and a challenging macroeconomic backdrop. That…

Transcripts for earnings calls, investor conferences, and analyst day events are among the most important sources of information for investors. These conversations offer unique…