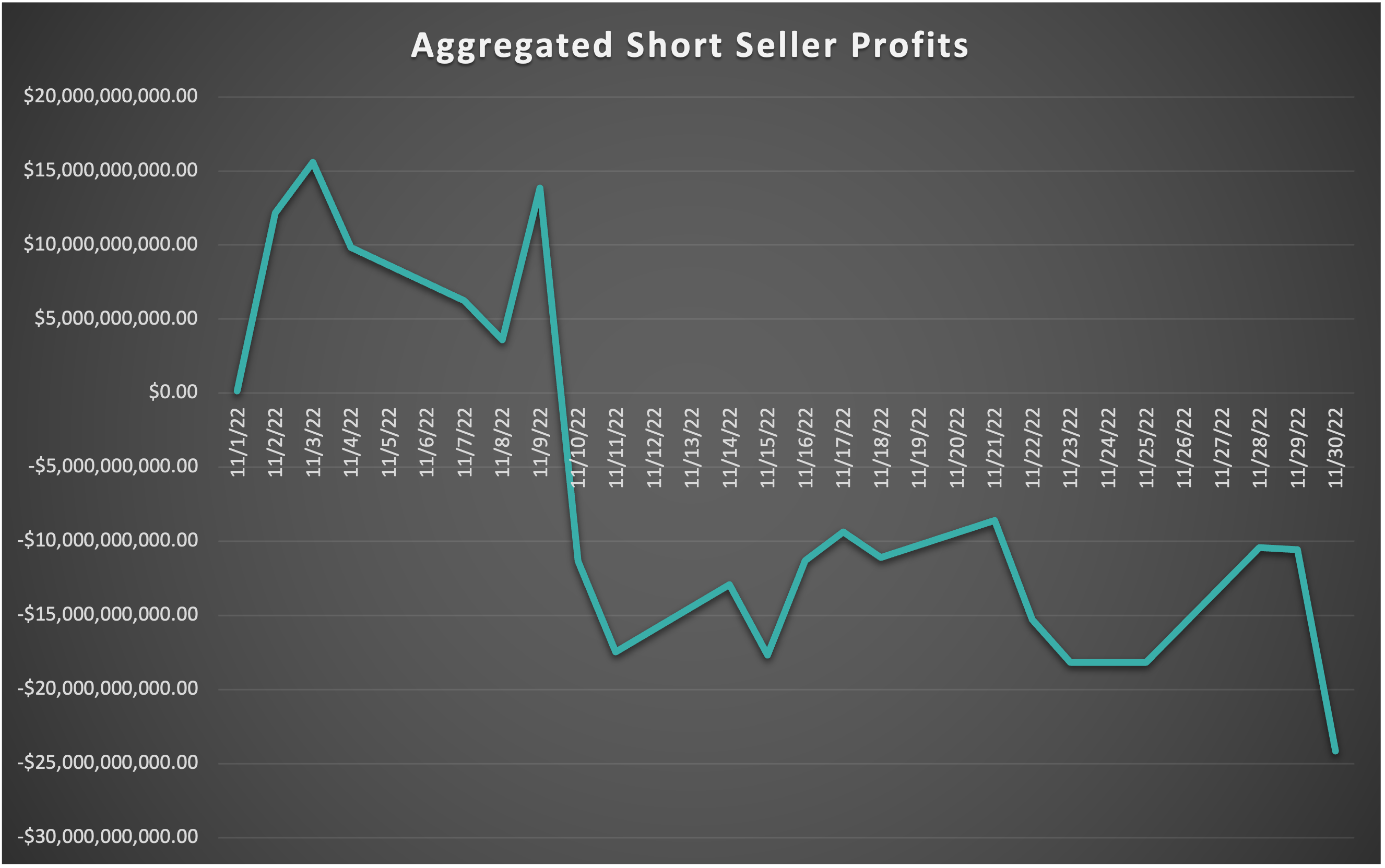 November was a choppy month, dipping in the first week of trading before staging a broad-based rebound to close higher. Many companies in the tech sector that enjoyed strong growth at the height of the pandemic have had to acknowledge that they hired too aggressively during that time, resulting in layoffs as growth has since slowed. Last month saw a slew of companies announce workforce reductions.

Here are ORTEX’s estimates for how aggregate short interest (SI) shares changed for each S&P 500 sector for the month of November.

The market’s overall trajectory in November was reminiscent of October’s performance, with the initial dip leading to short-seller gains that were subsequently wiped out as the market climbed in the latter half of the month. Overall, bears accumulated aggregate losses of $24.2 billion.

Short covering has contributed to the market’s recovery in recent months. If we compare the average days to cover (DTC) for all S&P 500 constituents to the performance of SPY, the inverse correlation becomes clear.

Chinese e-commerce titan Alibaba (NYSE: BABA) plunged to multi-year lows in late October after Chinese President Xi Jinping clinched an unprecedented third term, sparking fears that the government would continue hampering growth for large technology companies. The stock then rebounded throughout November, driven by better-than-expected third quarter results and a Global Shopping Festival. The stock’s recovery was painful for short-sellers, resulting in $1.66 billion in losses and making Alibaba the biggest loser for bears.

Elon Musk may loathe short-sellers with a passion, but he helped Tesla (Nasdaq: TSLA) bears reap $2.37 billion in profits during the month of November. That made the electric vehicle (EV) giant the top stock for short-seller profits last month. Not only has the chaos at Twitter undermined investor confidence in Tesla, but the financial ties within Musk’s empire became even clearer when the billionaire sold approximately $4 billion of Tesla stock in early November. Musk told remaining Twitter employees that the move was designed to “save Twitter,” raising tangible fears that continued deterioration of the social media platform’s business could lead to Musk unloading more Tesla shares.

In terms of the top short squeeze candidates as of right now, here are the 10 stocks that have the highest ORTEX Short Scores on our platform. Our ORTEX Short Score uses a multi-factor model that incorporates multiple short-related metrics, with a higher score indicating that the stock is heavily-shorted and has other characteristics that increase the possibility of a short squeeze occurring.